“Chase everything you want to do and try your best at it” – A.C. Jones

I’m sure you’re all aware that since I last posted, a tragic and shocking event occurred at the Ariana Grande concert in Manchester. I think it hit everyone hard, I personally haven’t slept much since as it was in the city I call home, at a venue I regularly visit and many people I know were present that night. My love and thoughts go out to the families who have lost a child or a parent, to those who escaped with their lives but are physically or emotionally scarred, I can’t imagine what any of them are going through. Music is a wonderful thing that is supposed to bring us together, that is a release from the daily troubles of life, that heals us, so for this to happen when young people were supposed to be having the time of their lives is devastating. It’s best to focus on going forward now, to focus on our response which should include coming together and supporting each other. It will be difficult for the families affected to see a way to move forward at this time so I’d like all my readers to spare a moment to check out the just giving page below and to donate (even if it’s just £1) to help the families affected. Thank You.

When I was at Vamos Festival two weeks ago I met some fantastic artists from the other side of the pond. One of those artists was A.C. Jones. I did a quick interview with her before her set and she was lovely, the interview is below and there were certain things that intrigued me, for example she talks about how she was classically trained in Opera and now she’s singing Country music. When she took to the stage you could tell she was well trained vocally. Her voice was flawless, every song, both originals and covers had me hooked and she was bursting with a bubbly personality. Read on to find out more about A.C. Jones and listen to one of her tracks below!

First of all can you tell me a little bit about your journey into music?

I have a very musical family so it’s in our family history, I grew up with that, loving every kind of music. We got into church so I started out singing gospel music and learning instruments like guitar and piano and from there I started writing some original songs, gospel and then I started drifting into the Country genre. I had a few bands as I got older and I had a tribute band actually which gained some traction back home and after that we started transitioning from the tribute band to an originals band with my original songs.

What were your main influences growing up, what did your parents make you listen to and what are you listening to now?

Oh gosh, we listen to everything from country music to classic rock to some classical there was a mix of everything. I was classically trained for about ten years in opera so quite a mix of different genres and today I’m still listening to Country and to Rock, it reminds me of my childhood and I’ve really been getting into Indie music as well. I love all music.

When you’re writing songs where do you draw inspiration from particularly in the lyrics?

Sometimes it’ll be that I’m trying to fall asleep at night and a thought goes through my mind or I’ll be out in the World watching people go by or sitting out by a beautiful lake or stream and just looking at nature and what’s around you and you draw influence from there. Sometimes it’s life experience, events that have happened to me or someone I know. It’s a good place to start and sometimes the song keeps that feel and stays true to the story and sometimes it gets altered along the way but either way it’s always fun to write. 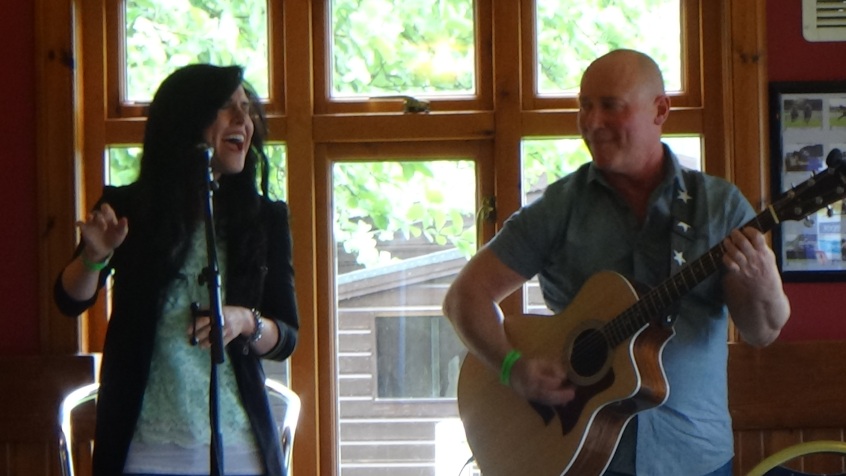 What’s the strangest thing you’ve ever written a song about?

The strangest one is probably about a crush on a teacher, not me, but in college there was a very young professor and all the girls just thought he was quite adorable so I thought it’d be fun to write a silly song about that so that’s probably the strangest one.

And when you’re on stage are you completely focused or do you let your mind wander – What are your mid-gig thoughts?

It can be anything to making sure I know the lyrics coming up because you get used to singing so many songs but every now and then something will kind of catch you off guard and you start thinking oh do I know the lyrics coming up and there’s a brief moment of panic. If you see something out in the audience you start thinking about that sometimes, I’m a people watcher so I watch the audience and I think I wonder what their life is like, who they are and what they do, where they’re going from here. So it’s a bunch of random thoughts!

When you write songs they become like your babies but I wondered if you had a favourite of yours that you enjoy playing live?

I think my favourite song is probably wanderer, it has a lot to do with people I met in my life so it’s a song that’s very near and dear to me.

Do you have a favourite quote?

I went to school to study bio-chemistry, a science background and I was going to go to medical school or get my PhD and I decided instead to take some time and focus on the music so in that time I was thinking how realistic are these dreams that I want to do and that always weighed on me and so one of the things that I’ve said before is that some of my dreams are achievable, some of them are downright impossible but I haven’t yet decided which ones are which so I’m going to chase them all. So just go out there and chase everything you want to do and try your best at it. To anyone out there who loves songs and loves to write just get out there and do it, put your songs out there because it’s daunting but you don’t know who’s out there who needs to hear that song and those feelings.

What’s next for you?

Going back home, I’ve got a lot of live performances this summer, getting back in the studio, I’ve been writing some songs with my label in Nashville. Hopefully we’ll have a single coming out in a very short amount of time so I’m looking forward to that.

If you haven’t heard A.C. Jones before you’re really missing a treat so check out some of her music below.